This page explains some of the fundamental concepts, components and terminology associated with standard computer networks. These networks are often referred to as local area networks (LAN).
This type of network is technically known as an Ethernet network.

EXAKT - LINK cables must be set-up in a seperate Exakt network, they cannot be mixed with LAN networks.

An Ethernet network consists of two or more devices effectively connected together as shown in the diagram. 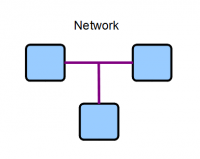 A MAC (Media Access Control) address is a unique series of identifying numbers assigned to network devices. They are generally assigned to a product as part of the manufacturing process. It is guaranteed that no two devices in the world will share the same MAC address.

A subnet mask is a series of 4 numbers, each in the range 0 to 255, assigned to each device on the network. It is used by a device as a filter, in conjunction with the IP address, to decide which other devices it should communicate with. Masks typically consist of a combination of the numbers 0 and 255. More advanced configurations may use other numbers but this is uncommon and will not be discussed here.

In the diagram below, device 4 cannot communicate with any of the other devices. This is because their subnet masks (255.255.255.0) dictate that the first 3 numbers of their IP addresses must match exactly with the device they are communicating with. This condition is only true when devices 1, 2 or 3 are communicating with each other. It is not true when any of devices 1, 2 or 3 are trying to communicate with device 4 because the third number in its IP address does not match that of the other devices.

There are two ways to assign IP addresses and subnet masks to a device on the network, static assignment and dynamic assignment.

Static (fixed) assignment is when the IP address and subnet mask are both programmed manually into the device. This is normally done using a setup menu on the device. Some devices do not support static assignment.

Dynamic assignment is when the IP address and subnet mask are both assigned automatically, over the network. This is done using a mechanism called DHCP (Dynamic Host Configuration Protocol). When setup for dynamic assignment, a device sends a DHCP request onto the network and then waits for a response specifying the IP address and subnet mask it should use. Devices normally send their request when first connected to the network or immediately after they are powered up.

Address Reservation (dynamic fixed assignment) is a feature, supported by some DHCP servers. This use of this feature guarantees that a specific device will always be automatically assigned the same IP address. The advantage of this approach is that it harnesses the advantages of both static and dynamic assignment techniques.

A subnet (subnetwork) is a subdivision of a larger network. Most networks are classed as subnets since they are typically connected to the internet and are thus a subdivision of that network. A subnet is defined by the range of IP addresses that are deemed valid on it's network.

Switches come in different types, sizes and speeds. The most common type of switch is known as a "dumb" switch because it is not user configurable. A switch's size is defined by the number of network sockets, or ports, it has. The diagram below shows a four port switch.

A switch's speed defines the maximum rate that data can be transferred through each port simultaneously. This rate is specified in megabits per second (Mb/s). The actual speed of data transfer, through each port, is determined by the maximum speed of the slowest component in the data transmission path. This could be a device or the switch itself.

A router is a device that manages the boundary between two networks or subnets.

To make the Internet more friendly, you can use names rather than numbers (e.g. www.Linn.co.uk) but those names still need to be converted back into their real numeric address for the data to be sent. For example, www.Linn.co.uk might 'resolve' to IP address 195.59.102.230. The name to IP address convertor is called a Domain Name Server

A WAP is a device that provides wireless access to a network. 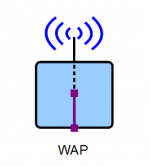 The WAP can broadcast without any restrictions, or can be encrypted to only allow connections with a "key" to access. This will stop unauthorised access to your ethernet network.

Ethernet cable has some spare cables that can used send low voltage DC power over the CAT-5 cable. This can allow a WAP or other devices to only require the ethernet CAT-5 cable, and NO power cable, to operate.

These adaptors allow you to broadcast Ethernet traffic over mains electricity wiring. If there is any RF interference on the mains cable, this will affect the amount of traffic (bandwidth) that can be send over your Mains cables.
They are not advised for use with the Linn DS as the bandwidth/performance is entirely dependant on the quality of the Mains supply. Some electrical devices such as Refrigerators, lighting dimmers etc can generate electrical noise that reduce the bandwidth. If the Linn DS is getting Music from a UPnP Media server, internet, Songcast from a PC or another DS, that are using the Ethernet over Power adaptors, then this reduction in bandwidth can cause the Linn DS to mute or not be found on the network. 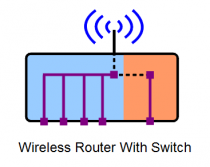 A mesh network is a mulitple Wireless Access Points connect directly, dynamically and non-hierarchically together and cooperate with one another to efficiently route data.
As the Linn DS/DSM/HUB uses multicast boradcast for UPnP, some MESH networks do not support this broadcast very well and may not allow you to discover the Linn DS/DSM/HUB. If you are changing to a MESH network please contact your Retailer to check if this Mesh network can support UPnP.

The Services, ports and protocols are used by the Linn app and players in the network
Services

TCP on an ephemeral port

Make sure they are programmed to work in Layer-2 mode

This is not an official standard and is not supported by the Linn DS/DSM.

If you are using more than six Linn DS/DSM products in the same network and want to share/Songcast the music to other rooms then make sure the LAN can support Multicasting.

If you have issues with your Routers check: