Exakt system not working or powering up

Check HERE for points to check if your Exakt system is not working.

The Virgin Media V6 & Sky-Q boxes are very strict on HDCP issues, as these work in HDCP 2.2. It has been found that if your TV or Projector only supports HDCP 1.3 and your AV Receiver (Linn DSM or other manufacturer) supports HDCP 2.2 then the mismatch will cause the Virgin Media V6/Sky-Q box NOT to send video (due to encryption issues).
The solution is to put an HDCP convertor, such as the LINDY or NEET Bidirectional HDCP Converter, V2.2 to V1.4, between the Virgin Media V6 or Sky-Q HDMI output and Linn DSM HDMI input. This will force all communications to HDCP 1.3
Some customers have found disabling "CEC" and "CEC Auto Select Source" on HDMI section of Konfig will fix this issue. (Do the Konfig changes and power cycle the Virgin Media/Sky box)

I can only see the Music,, I cannot play and all of the coverart is blank

Check the Network settings are correct on the Kazoo Server settings.
If Kazoo Server network is pointing to a different network (one that was previously setup), then all links to the Music files and coverart files are give links to this network. So double check that this is setup correctly.

Due to recent Windows 10 updates you may not be able to see Kazoo Server running on the same PC and my Kazoo App. I can however see the Kazoo Server on iPhone/iPad/Android. If you have this issue then there will have to be a schedule added to the Windows 10 PC to get this to worj

1. Click in in the windows Search box (beside the windows icon) and do a search for CMD.:
2. When this show one of the options as “COMMAND PROMPT”, then RIGHT click onCOMMAND PROMPT and “RUN AS ADMINISTRATOR”
3. Hit Yes to acknowledge this a selection
4. Now Cut& Paste the following line in to the CMD prompt and run

5. This should report “SUCCESS: The scheduled task "MyTask" has successfully been created.”
6. Now reboot your PC and retry the Kazoo Server in Kazoo. It should now work until Microsoft has a fix.

We suspect that Windows10 Security has blocked this installation.
The solution is to

Note: If you have previously run the kazooserver_latest_win.exe then the unblock option will not be shown. You will need to delete and re-download this file, unblock and then run.

If you already had QTS 4.3, or later and the QNAP update was firmware 5.4.1.6 (13th Feb 2018), Kazoo Server does not work. This because QNAP have removed MONO from their libraries. The solution is to upgrade to Kazoo Server 4.9.1 or higher. This can downloaded from http://OSS.Linn.co.uk

If you have a compilation Album, in some cases you will get a repeat of the same Album but have different Artists against each Album cover, but iTunes only show this one Album. The solution in this case is to go into iTunes and "Get Info" on that Album, you will find that the Album Artist is blank. Add in either "Various Artists" or the primary artist name. This will fix the multiple Albums in Kazoo Server listings.

I can no longer find my iTunes library

I cannot play any of my iTunes Music

At present the (16th July 2014) ONLY the Kazoo Server LIBRARY can be seen on the Kazoo UI. The iTunes and Media apps functions are not available at this time with the Kazoo UI.

All Kazoo Server functions can be used with the Kinsky UI.

After QNAP firmware update Kazoo Server does not work

Kazoo Server fails to start on a MAC

If this is a first installation of the Kazoo Server you will have to Reboot the MAC and after Reboot run KONFIG to set it up. If Kazoo Server does not show up in Konfig then go into FINDER - User > Shared > Kazoo Server and email a copy of Userlog.txt and KazooServer.crash (if it exists) to the Linn Helpline.

This is typically on a multi-user PC/MAC. If the PC/MAC has just started Kazoo Server is started on the first user logon.

If you do not log-out of this user and only SWITCH to another user this can cause issue in file/folder permissions.

If you are going to edit the Kazoo Server settings then the solution is to logout of the all of the other users and only have a single user logged in. That is, the simple solution is to restart the PC/MAC and first of all log-into the User whose iTunes library you are using. The use Konfig within this user to make the settings.

If the Music is USB drive connected to the PC/MAC this drive may be going into sleep mode, Kazoo Server can no longer see or get access to this music because the drive has gone into sleep. This can normally be fixed in Windows and by going into the power saving options. However some USB drives will still go to sleep of their own accord. There are some apps to drive and keep the hard-drives alive, for example:

For the PC have a look at [Keep Alive]

For MAC have a look at [Keep Drive spinning]

Both of these seemingly unrelated issues are caused by QNAP attempting to store your home folder in ram instead of on a physical hard drive. To fix, go into QNAP, navigate to the Privilege Settings | User section. Press the Home Folder button and enable this and ensure that the drop down selects a volume (not device).

Some NAS drives require you can to install Kazoo (it does need Optware IPKG installed first, otherwise it will fail.

Check the processor in the NAS is supported by the Kazoo server version. (Marvell CPUs are not supported, ARM x19 processors are presently in Beta release)

On a PC/MAC, check in the Kazoo Server settings that "Enable watching local file system changes" is turned ON. This will continuously check selected folders for any changes and additions, then add them to the Kazoo Server.


On a QNAP this feature may not work as the Qnap operating system does not automatically flag file system changes to Kazoo Server. It is recommended that you go into the Library option and press the Rescan button.

Kazoo Server can be seen but will not Play any Music

If the Kazoo Server device has changed to a different network. You will have to change/check the Network configuration in Preferences. (This is only set and an IP range and will not clear and set for a new IP address range)

The Kazoo Server does not support WAV files (like many UPnP Media server). This is because the metadata locations are inconsistent in different variants of WAV files and this can cause issue reading the correct metadata.

To clear all setting to Default

Note: you may have to go into the File Station - Settings and enable: "Show hidden folders on NAS" to see the .config folder 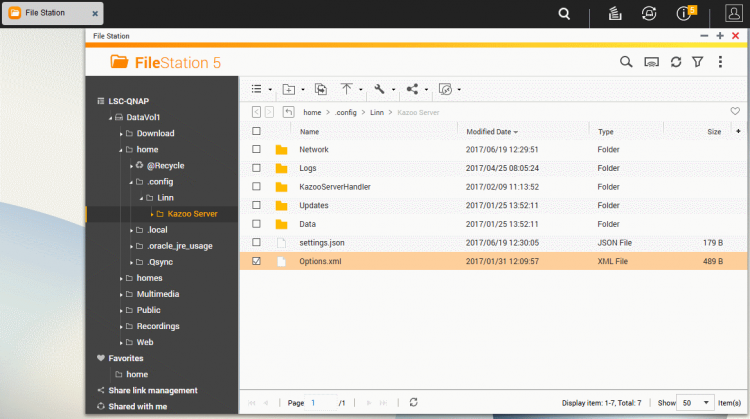 Twonky Media music greyed out or will not play

If you are looking at the Music and the Music cannot be added to the Playlist or is grayed out. But you may if you go to a PC/Mac and this does allow the same Music (or vice-versa) you will probably also using Twonkymedia.
The solution is to go in the Twonky Settings > Advanced > Media receivers and RESET LIST. Now retry the iPad Kazoo and it will probably now work.