A DSM system may, at any given time, impose a number of possible latencies (time delays) to the audio signal path. In other words, there is a delay between the audio entering the inputs and the audio reaching the outputs. This document explains the various latencies that may be present and how they relate to each other.

The diagram below shows the possible latencies within a DSM system. Delays shown in orange are applied within the DSM product and those in blue are introduced by components external to the DSM (Exakt speakers, AV receivers etc). Some latencies are unavoidable due to processing time and others are user adjustable. 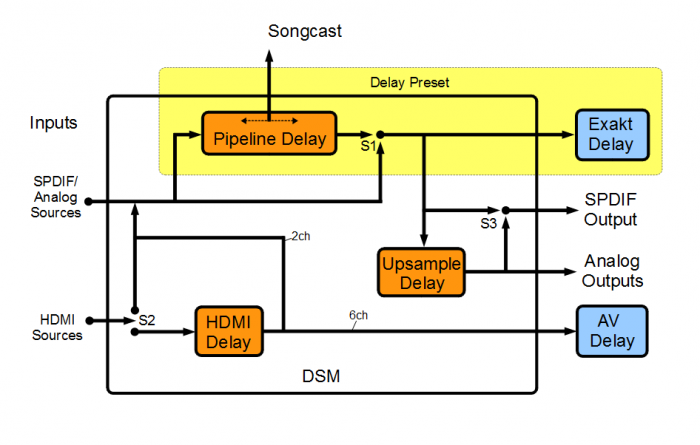 Delay Preset is a user adjustable (Konfig) device setting on the DSM product range. It provides manual control of the total delay between input and output. It's main purpose is lipsync adjustment for sources that have video content. To deliver the requested Delay Preset, the DSM software factors out any fixed delays (ie Exakt), that already exist in the signal path, then applies the remainder to the internal Pipeline Delay module. Delay Preset only applies to sources that have their Delay Mode set to "Variable".

Example: With an Exakt delay of 45ms and a Delay Preset of 100ms, a value of 55ms will automatically be applied to the Pipeline Delay.

Upsample Delay represents the latency applied by the upsampling filter within the DSM. Its value is determined by the amount of upsampling required. It is applied in addition to any Pipeline Delay that may be present. For SPDIF outputs only, the Upsample Delay can be bypassed completely by setting the Digital Output Mode option to "Raw" in Konfig as represented by switch S3 in the diagram. For analog outputs there is always an Upsample Delay component present.

Exakt delay represents the latency applied by any Exakt engine external to the DSM such as an Exakt speaker or Exakt Box. The Exakt Delay value is detected by the DSM during the Exakt device discovery process. When detected, this value is automatically accounted for, by the DSM software, in all Pipeline Delay calculations.

The HDMI Delay represents the 8 channel HDMI delay module within the DSM. This module is only active when the HDMI Audio Mode option is set to Surround as represented by switch S2 in the diagram. The purpose of the module is to maintain synchronisation between the two channels of audio output of the DSM and the remaining (up to 6) channels that are passed on to an external AV receiver.

The DSM software uses the value specified in the AV Latency option and the value of the Delay Preset to establish the relative delay between the DSM outputs and the AV outputs. It then synchronises both sets of outputs by automatically applying the correct delay to the HDMI delay module, either by delaying the 2 DSM channels or delaying the remaining AV channels.

The AV Delay represents the latency applied by an AV Receiver external to the DSM. It's value is dependent on the model of AV receiver being used. The Konfig option AV Latency allows the user to inform the DSM software of the AV delay being applied externally. The DSM uses the specified AV Latency value to compensate for the external delay to ensure its audio output is synchronised properly with the AV receiver output.

Note: AV Delay and the AV Latency option are only relevant when the HDMI Audio Mode option is set to Surround. 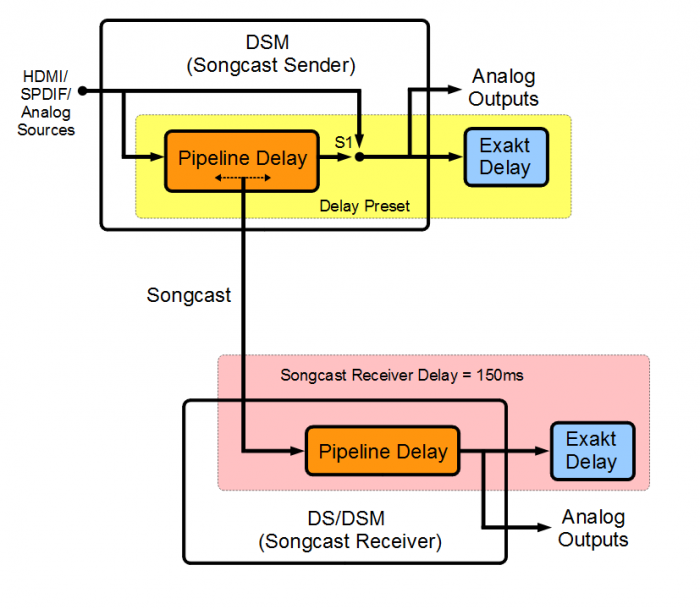 Note * This value is specified, within the Songcast data, by the Sender. DS/DSM Senders always specify a value of 150ms for Songcast Receiver Delay.This value has been chosen to accommodate typical network latencies.

A Songcast Receiver's audio may also be subject to a portion of the sender's Pipeline Delay, in addition to its own Songcast Receiver Delay. The sender transmits the Songcast audio exactly 150ms before it renders it locally, to ensure the Sender and Receiver outputs remain synchronised.

Example1: if a Sender's Delay Preset is 200ms, it will delay its Songcast transmission by 50ms

Example2: if a Sender's Delay Preset is 155ms, it will delay its Songcast transmission by 5ms

Example3: if a Sender's Delay Preset is 150ms, no delay will be applied to its Songcast transmission

Example4: if a Sender's Delay Preset is 140ms, no delay will be applied to its Songcast transmission

Example5: if a Sender's Delay Mode is set to Direct, the Sender's Delay Preset is effectively 0ms, no delay will be applied to its Songcast transmission

Example6: if a Sender's Delay Mode is set to Fixed, the Sender's Delay Preset is effectively 150ms, no delay will be applied to its Songcast transmission

Provided a Songcast Sender's Delay Preset is 150ms or greater it will remain in sync with all of its Songcast Receivers.

When watching a video, it may be necessary to adjust a Sender's Delay Preset to achieve synchronisation between the audio and moving image (lipsync). If the required Delay Preset is less than 150ms, it will not be possible for that Sender to maintain audio synchronisation with any Songcast Receiver.

Example1: if a Sender's Delay Preset is 200ms, it will be synchronised with its Receivers

Example2: if a Sender's Delay Preset is 150ms, it will be synchronised with its Receivers

Example3: if a Sender's Delay Preset is 140ms, it will not be synchronised with its Receivers

The Songcast application allows a desktop computer or laptop to function as a Songcast Sender. The application offers more control, of the Songcast latencies, than that provided by a DS or DSM Sender. The Advanced tab, in the Preferences menu, offers two latency preset options; Music Latency and Video Latency. Only one of these presets can be active at a time. 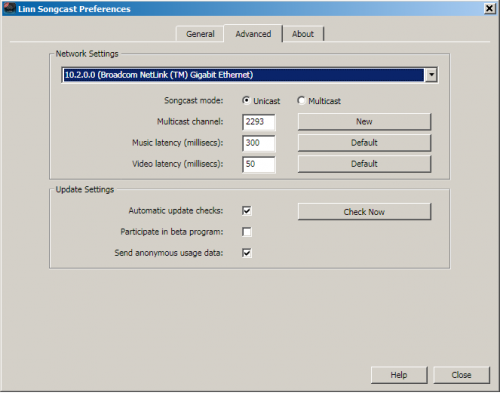 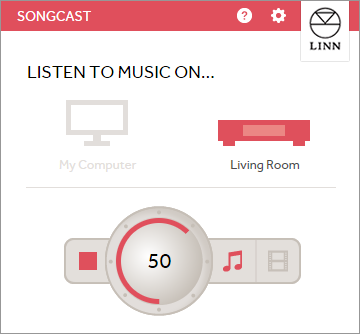 When watching a video, a low latency may be required to achieve synchronisation between the audio and the video image (lipsync), but low latency values may give occasional dropouts in the audio, depending on the quality of the network. It is therefore best to choose a (low) Video Latency value that provides good lipsync and a higher value for Audio Latency that results in no dropouts for your own network. When using Songcast, you can quickly switch to the appropriate preset for the content type (Music or Video) being used.

The latency preset value controls the Songcast Receiver Delay. Therefore, unlike DSM Songcast Senders, desktop Senders may achieve good results even with latency values below 150ms, depending on the network being used.