Difference between revisions of "Introduction To DS Concepts"

The following information introduces the concepts and terminology associated with Linn DS devices and systems. Linn DS devices play, or render, audio which has been retrieved from a location on a network. The network may be a small local network or a larger network such as the internet. The method used to retrieve or transfer the audio is called streaming. DS devices are sometimes referred to as digital streamers, but a more accurate title is media renderer.

Linn DS players rely on the existence of a standard network infrastructure. A description of the network will not be discussed here as it is dealt with separately on the DS Network Setup page.

Streaming is a method of delivering data to a device in a piecemeal manner. Rather than retrieving the whole file, the renderer fetches only a small portion of the file then starts playing immediately. Within the DS is a small reservoir, or buffer, containing the next few pieces of the file, in a queue ready to be played. The buffer is kept topped up, while audio is playing, by retrieving more data from the network. The buffer allows the audio to continue uninterrupted in the event of any brief dropouts in the network delivery. It also allows the audio to be faded out slowly in the event of any long term network interruption. 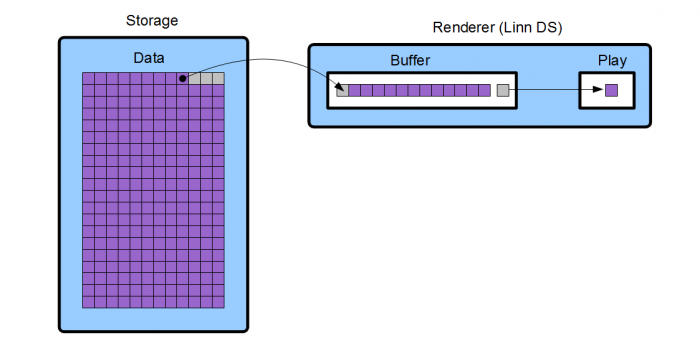 In the context of media renderers transferring files, there are several advantages to the streaming approach.

These advantages become clearer when one considers the problems associated with the alternative approach of retrieving the whole file before playing. The DS would require enough on board memory to store the largest possible file. In the case of studio master files, this is a lot of memory. In the case of internet radio, the file size is infinite, so it's not possible. When transferring large files, such as studio masters, these could take some time to transfer over the network, resulting in lengthy pauses between songs.

The three fundamental components of a network streaming system are storage, control and renderer. A system may consist of one or more of each of these components.

The most basic streaming network consists of a desktop computer or laptop connected to a renderer via a network. In this system both the storage and control components reside within the computer. The computer's hard drive would represent the storage and an application would provide the control mechanism.

A wireless access point (WAP) can be used to give other wireless control devices access to the streaming system. 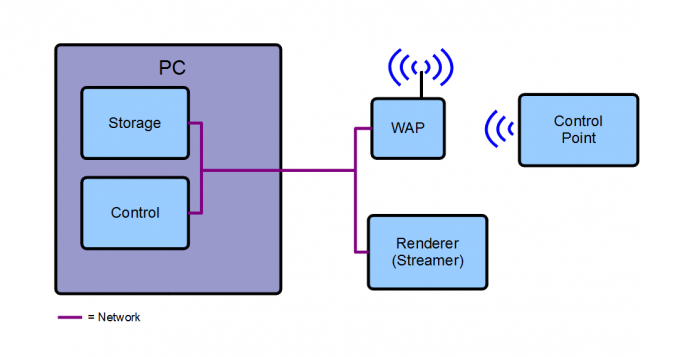 The computer containing the control and storage components may also be connected to the streaming network via a wireless link. This would allow both the streaming and the control mechanisms to function wirelessly. 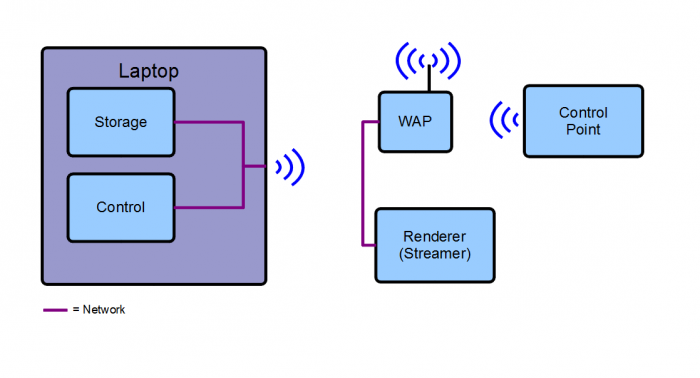 This is known as a wireless streaming system because the storage and renderer are wirelessly linked. Although this will frequently work, it is not recommended, for use in a high quality audio system, since wireless communications are not reliable enough to provide a consistent audio stream and thus could result in interruption to the audio during playback. It is particularly problematic when playing high quality audio files, such as studio masters, because they place a heavier load on the network communications, due to the significant increase in data density being transferred during streaming. Wireless connectivity is adequate for the control mechanism because that doesn't require a continuous uninterrupted connection.

A NAS (network attached storage) may be used to provide storage to a network streaming system. A NAS consists of a bank of one or more hard disk drives and built in computer in a box that connects directly to the network. The embeddded computer manages and controls access to the drives from other devices on the network. 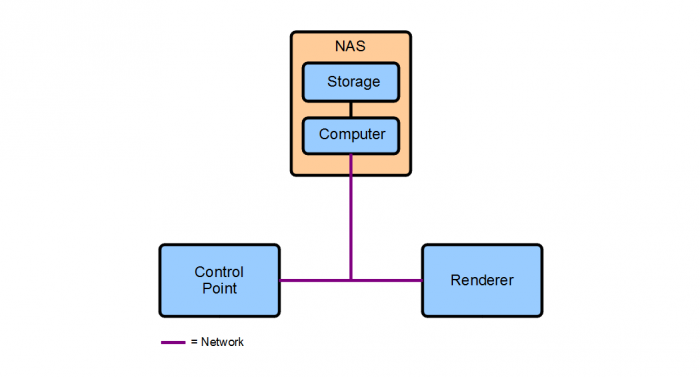 A wireless access point (WAP) can be used to give other wireless control devices access to the NAS and the renderer.

UPnP (Universal Plug and Play) is a set of protocols designed to allow consumer devices to interact over a network. Linn DS devices comply with the UPnP AV protocol, enabling them to communicate with other non-Linn devices, provided they also comply with this protocol.

The role of the three network streaming components can be performed by three standard UPnP components; UPnP Control Point, UPnP Media Renderer and UPnP Media Server. In this system, the Media Server performs the role of the storage mechanism. It doesn't provide the storage but manages access to it by responding to UPnP compatible network requests.

The most basic UPnP network streaming system consists of a desktop computer or laptop connected to a renderer via a network. In this system the storage, control point and media server components reside within the computer. The computer's hard drive is used as storage and software applications provide the control point and media server functionality.

A wireless access point (WAP) can be used to give wireless UPnP control points access to the UPnP media server and UPnP media renderer.

A NAS (network attached storage) may be used to house the storage and media server in a UPnP network streaming system. 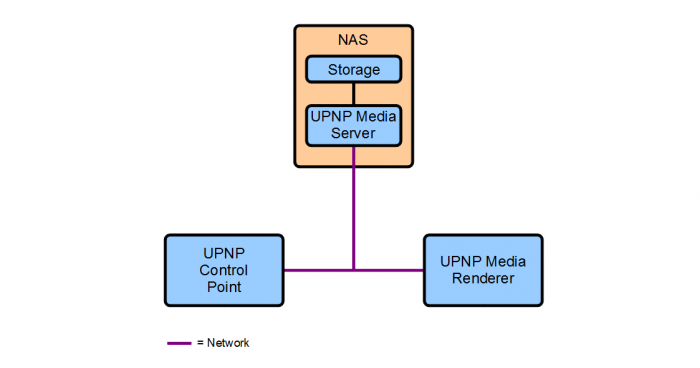 A wireless access point (WAP) can be used to give other wireless control devices access to the media server and the renderer.

The UPnP network streaming system can support the use of multiple NAS devices including multiple media servers. 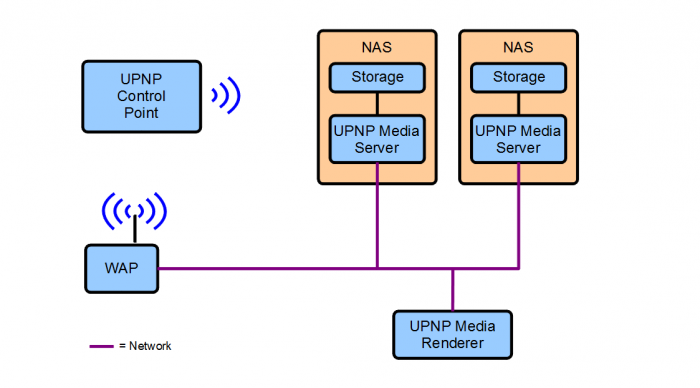